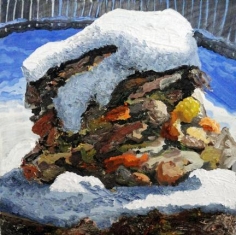 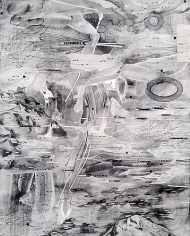 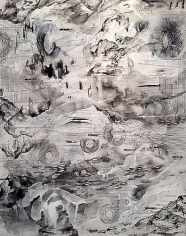 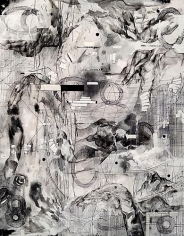 The exhibition brings together works from each artist and provides a first look at new directions in their professional practices, as well as a preview of projects set to launch later in 2014.

COLIN MUIR DORWARD
The work of Colin Muir Dorward originates from a renegotiation of the well-rehearsed “paint from life” methodology. Radical perceptions of his immediate visible surroundings allow the artist to depict a reality that exists beyond ocular experience. Dorward’s paintings are suffused with the people, spaces, and things that surround him and are marked by the flow of his life. Quotidian joys and pains, private meditations, and political agendas all find their way into his work.

Dorward received an MFA in 2013 from the University of Ottawa, and a BFA in Visual Arts from Emily Carr University of Art and Design in Vancouver in 2007. He received an Honourable Mention in the 2013 RBC Canadian Painting Competition, and was also a Finalist in the 2012 RBC Canadian Painting Competition. His work has been exhibited across Canada and is held in numerous private and public art collections, including the RBC corporate art collection and the City of Ottawa art collection.

NATASHA MAZURKA
In her professional practice, Natasha Mazurka explores the communicative potential of pattern. Through paintings and embossed drawings, Mazurka responds to the motives and outcomes—social, political, and epistemological—aligned with organizing the world through graphic syntax. By underscoring the elusive character of current technological and natural phenomena that have no concrete visible or physical form, her works bring out the expansive and transitional, that which has no fixed form.

Natasha Mazurka received a BA from McMaster University and an MFA from Concordia University, where she was the recipient of the J.W. McConnell Fellowship. She has exhibited her work at the Ottawa Art Gallery, Galerie SAW Gallery, Gallery 101, and Modern Fuel. In 2013, she was short listed for the CAO’s RBC Emerging Artist Award. She has been awarded numerous residencies and fellowships, including the Brucebo Fine Art Residency in Gotland, Sweden, and the Vermont Studio Center Painting Fellowship and Residency. Her work can be found in the collections of the City of Ottawa public art collection, Foreign Affairs Canada, and the Canadian Fine Art Collection of Gotland, Sweden. Later in 2014, her work will be on view in a solo exhibition at the Prince Takamado Gallery in Tokyo, Japan.

AMY SCHISSEL
Amy Schissel’s work explores the social ramifications of living in a data-driven and media-saturated culture. Schissel has created a language of painting that is inspired by the influence of digital technology. Electric and digital environments are depicted through the use of such elements as pixels, clusters, and loops in paint. Her paintings evolve through obsessive, repetitive mark making where paint and other media are built up and then worked back into the painting.

Amy Schissel was a finalist in the 2011 RBC Canadian Painting Competition. Her work can be found in the collections of the Canada Council Art Bank, Foreign Affairs Canada, City of Ottawa, Free University of Brussels, Belgium, and the Gotland Museum of Fine Arts, Sweden, in addition to numerous private international collections. She received a BFA and MFA from the University of Ottawa. She was Canada's 2009 recipient of the Brucebo Fine Arts Award, and the won the CAO’s 2013 RBC Emerging Artist Award. She has exhibited both nationally and internationally, including exhibitions at VOLTA NY, New York; University of Brussels Gallery, Karsh Masson Gallery, Centre d'art Imagier, Art Gallery of Alberta, Hamilton Art Gallery, and Toronto's Power Plant. Schissel maintains her professional practice both in Brooklyn, NY, and Montreal, and is a studio professor at Algonquin College.

ANDREW SMITH
Andrew Smith’s paintings are the result of an attempt to physically embody a line of communication that could be given by the language of movement. The parameters of this movement are oriented by the question of how to make a painting that can have an open dialogue with the representation of its subject matter. Central to this concern is the way in which a viewer could be involved in an active manner in the experience. In his work, Smith potentially constructs a metaphorical interface between the emotive and sensorial experience of making, and the manifold of significations that can be made by a viewer.

Andrew Smith has a BFA and MFA from the University of Ottawa. He has appeared in numerous solo and group exhibitions including Ottawa City Hall Art Gallery. His work can be found in private and public collections including RBC-DEXIA, Foreign Affairs, Canada, and the City of Ottawa public art collection.